Everyone has a to-do list for life. Climbing a mountain was never on my to-do list, at least not until my long time friend and occasional assistant Steve told me it was. And so, the Pitons came into view. 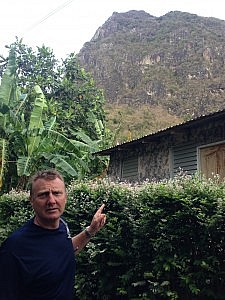 Steve looking up at the summit before the climb

For over a decade now I have been lucky enough to travel to some very exciting locations to photograph hotels and, when I’m really lucky, the overall destination too. But all too often I fly in, focused on the job at hand and fly out immediately after without the chance to explore a whole lot. That is perhaps how it should be. However, while on a photo shoot in Barbados in late 2013 with Steve, he got chatting to one of the cleaners at our hotel about where she was from. (He likes to ask questions and is a generally curious man, so he usually finds out more than the average person.) She went on to explain how she was from St. Lucia and how it was one of the most beautiful islands in the Caribbean. In the midst of describing its beauty, she mentioned the challenging climb of the Pitons and how people from all over the world come to scale them. That piqued Steve’s interest and my to-do list suddenly had “climb a mountain” tacked to the bottom of it.

With Steve’s head now buzzing about St. Lucia he immediately volunteered himself as my assistant for any upcoming photoshoots on the island. At the time I didn’t, but just a couple of weeks after that trip, a client of mine with hotels in St. Lucia set up a shoot for a few months out and Steve got his wish of accompanying me. From that moment on, he would send me articles about hiking the Pitons, photos of the Pitons, information about the Pitons, EVERYTHING was Pitons related. Now, up until this point, “hike a mountain” was still a sticky note on my to-do list, but due to his enthusiasm, I decided to replace the sticky note with permanent marker – well, at least erasable pen. I found myself agreeing to the idea and then immediately beginning to worry about whether or not I was up to the challenge.  And after reading that the majority of tourists who attempt to climb Gros Piton don’t actually make it to the top, I decided to dust off my gym membership card and start getting back into shape. If I was going to climb a mountain, I sure as hell had better make it to the top.

It worked out for workouts

Just days before we were due to leave for St. Lucia, I got a call from the client saying that the island was getting hit with horrific rains and that the main road to the hotel from the airport had been cut off and partially washed away, postponing our trip for another 4 months. It was a gift in a way. I kept feeling like I needed more time to build up my strength anyway.

When we finally made it to St. Lucia, we were able to stay an extra day at our client’s property after the shoot on one condition: we had to complete the photo

shoot BEFORE attempting the hike, just in case we broke a leg on the mountain and were unable to finish the photos. I thought he was joking when he made that stipulation, only to find out that he had himself attempted the hike some 10 years prior, saying that it was one of the most grueling things he had ever done (and that’s coming from a former LAPD officer). This did not help my anxiety. We made sure to take the long way back to our rooms every day, eat well, and build strength by lugging equipment around the hotel rather than use a golf cart during the shoot.

And then, the day we had been working toward came. A 4:30am call time and a 2.5hr taxi ride dropped us off at the bottom of Gros Piton around 7am. With our guide leading the way, we set off at a brisk walk along an undulating path, occasionally climbing over some bigger rocks and boulders. In the beginning, my camera bag seemed pretty light, but once we started our ascent, it became apparent that the bag was going to get heavy very quickly. About 30 minutes into our gradual climb it started to get a little steeper. The path seemed to disappear and in its place we began to climb up an even steeper, winding incline of tree roots and rocks. Still nothing too bad, but it got steeper and steeper and it began to feel like we were climbing a never ending staircase. The guides who nip up and down this mountain sometimes several times per day, had over the years strategically placed helpful tree branches as make shift hand rails, sometimes protecting us from a steep drop off and other times coming in handy just to pull yourself up the mountain.

Still less prepared than I probably should’ve been, I quickly became concerned that my childhood asthma might come back to haunt me as I seemed to become breathless more quickly and more often than Steve. Both he and our guide were nice enough to make pit stops occasionally and let me catch up.

Petit Piton as seen from half way up Gros Piton

Most of the journey was under the shady cover of tree limbs, but right around the half way point, the trees cleared and we had an amazing view of Petit Piton, sea below, and for miles off into the distance. It was the perfect place from which to photograph – making hauling the camera with me completely worth it. The guide had told us it would get harder from there to the three quarter mark and that once we hit the three quarter way point, there was no turning back. If I didn’t have doubts about making it to the top before he said that, I certainly developed them directly after the words left his mouth. But after a quick water break and the chance to catch my breath again, off we went again.

It can’t possibly get steeper

After climbing up, up, up, the terrain got even more steep! And about 30 minutes later, we caught sight of the three quarter marker. At that point, In my mind I knew I was going to really do it. There was no turning back. I know it’s not 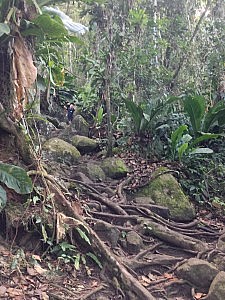 Look at Steve to get a sense of scale

Everest, but for me it was a big thing. As we got close to the top, there was an area of really large boulders we had to navigate through at a crazy angle so we were actually properly rock climbing at this point. By now the adrenaline of knowing we were close was carrying me through. Still, Steve was slightly ahead looking back and waiting for me to catch up, egging me on. We started to see more light coming through the trees as the foliage changed slightly again, we knew we were close. Steve disappeared over a rock and I could hear him saying “We’ve done it!” The last few steps over the last rocks were exciting and all of a sudden there was no more “up”. Between the trees, we could see over the edge towards the South of the island for miles. After about 20 minutes at the top, soaking in our glory, we began our decent, passing people ascending as we went. I know I had a smile on my face most of the way down, filled with an amazing sense of achievement. 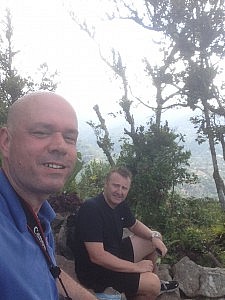 As we neared the base of Gros Piton, we promised ourselves a celebratory beer at the small hut we’d seen at the bottom, ending our long journey with a high five, 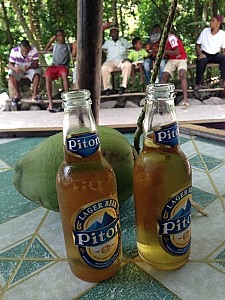 a hug, a Piton beer, and the ability to proudly cross “climb a mountain” off my to-do list. I will always be thankful for all the encouragement my mate Steve offered to push me out of my comfort zone and not only attempt, but successfully accomplish an endeavor like hiking the Pitons. From then on, I’ve been inspired to make time when I can to actually do something apart from work when visiting different places. After all, life is a journey and we are on that journey every day.

Our Most Famous Hotel Photography Clients